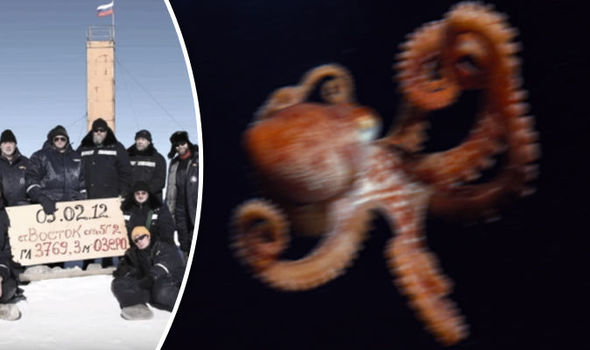 05.02.12 етВосток 52 A 3769.3 0380 Lake Vostok Expedition Year 2012 Putin's Expedition to capture Organism 46-B which is the behemoth of the Great Deep which is being used to weaponize the COVID-19 mRNA shots and flu shots. Here's more evidence of the expedition. They used vodka to get the creature drunk to capture it and harvest the eggs, which are antihuman demonic carnivorous creatures from below! Now you understand fully why vodka is pushed so heavily also! No kidding!! It's the only alcoholic beverage that you can drink and not eat after becoming intoxicated! It's a powerful weapon against unsuspecting enemies that are not accustomed to hard liquor that makes you not eat!! They push it on the American Indians because it's such a HUGE SUCCESS with subduing their enemies!!! North Central American Indians speak the sacred language with minor changes such as they dropped the "r" off, of the few that still speak Ashurit. It was part of their destiny to receive a new language, which is English, as recorded in Scripture the Holy Bible the evangelizing gospel at tinyurl.com/Ashurit and they have! Prophecy fulfilled. Amen. So they were difficult to hide under the hand of Allaha since a few speak Ashurit still, except that they call it Lakota, Dakota, Nakota, and one other! I am praying for their healing all the time and it's been helping. All glory to Allaha! Amen. There's more on My channel about Organism 46-B and the sentient world simulation that you must know about right away! Thanks for sharing content like this and subscribe! We Warned You In The Holy Bible That The Man Of Sin Was Going To Sit In My Holy Temple As If He Were Allaha http://newtube.app/user/Sarrah/ibjz30b The DEMONS in the mRNA shots 666 http://newtube.app/user/Sarrah/eYUPNLo U.F.O. Mothership VIDEO PROOF Weaponized Nephilim Eggs Being Dropped From Above INSIDE Spheres http://newtube.app/user/Sarrah/8FBpQZC Smaller UFO Mother Ship Dropping Spheres http://newtube.app/user/Sarrah/ZbKULh1