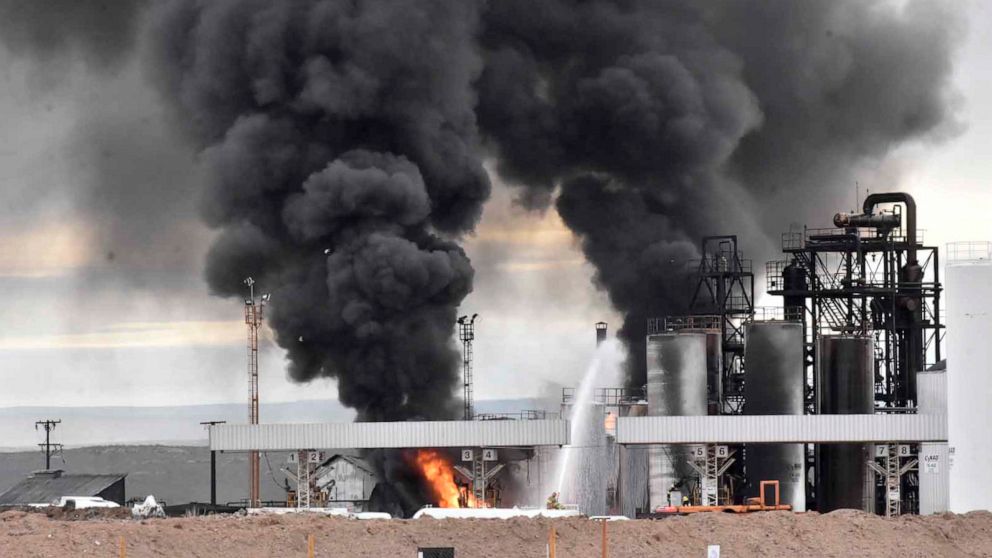 A fire in an oil refinery in southwestern Argentina has killed at least three people By The Associated Press September 22, 2022, 10:44 AM https://abcnews.go.com/International/wireStory/fire-argentina-refinery-kills-90331213 Photo caption: Smoke rises from the New American Oil (NAO) refinery in Plaza Huincul, Neuquen province, Argentina,Thursday, Sept. 22, 2022. An explosion caused a major fire this morning at the NAO refinery, killing several people the town’s mayor said. (Fernando Ranni/Diario Rio Negro via AP) The Associated Press BUENOS AIRES, Argentina -- A fire at an oil refinery in southwestern Argentina killed at least three people early Thursday, according to local authorities. Article: Firefighters worked throughout the morning to extinguish the blaze that started at a storage tank at the New American Oil refinery, about 120 kilometers (75 miles) from the provincial capital of Neuquen, . The fire quickly spread throughout the refinery and local media outlets published video showing a massive explosion followed by dark clouds of smoke rising from the facility. Three workers at the refinery died, said Mayor Gustavo Suárez of the nearby town of Plaza Huincul, The cause of the fire is under investigation, the Neuquen provincial government said. The fire quickly “took over the entire refinery,” said Roberto Bello, a law enforcement officer with the Neuquén Police Department. The Private Oil Workers’ Union of the Río Negro, Neuquén and La Pampa provinces called for a workers’ strike, saying it is “fed up with the lack of commitment to the life of workers.”