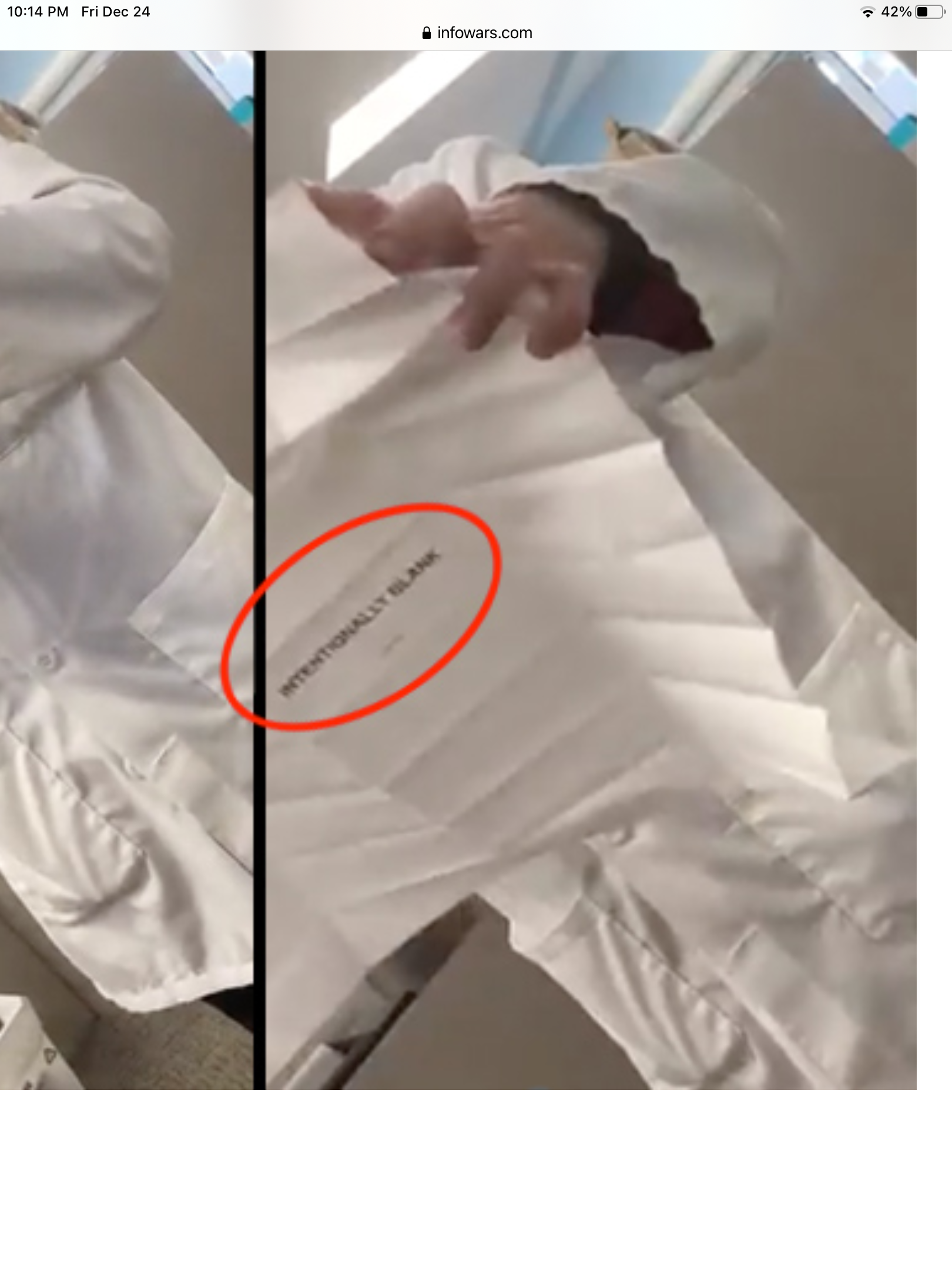 If you are wondering What is in the Brain of those being Injected, it is clearly written on the Insert

The Great Realization https://www.infowars.com/posts/pharmacist-shocked-to-discover-vaccine-inserts-are-blank-i-shouldnt-be-giving-these-out/ Pfizer said they will release the data for informed consent in 75 years. Court ordered 30 pages released in December. Note they do not explain their abbreviations like PM. They avoid saying Per how many Injections https://drtrozzi.org/wp-content/uploads/2021/12/Pfizer-trial-results-first-3-months.pdf They have 42000 adverse reports in 1 month, Including almost 2000 deaths. That is 5 percent, that is enough to stop the shots permanently, as they have been in many countries, and put the approvers on trial for genocide. Now, they never say how many actual injections, that are not saline, that have been injected to get the 42000 reactions. Plus they admit the number of adverse reactions reported are grossly under reported for many good reasons they list. One reason not listed is that often Drs are threatened or fired or placed in a dungeon, yes a dungeon. Actual reactions are 1000 times more!!! I will tell you that based on this 42000, they have included some of the most minor reactions, including site needle pain. Therefore we can extrapolate that a minimum of 70 percent up to 85 percent of injections would have at least a minimal reported reaction giving 42000 reactions hence 20 percent more topping up to 100 percent injections would make the actual injection sample about 50000. So, now we have our injection size, we look at fatalities of more than 1200, and we then know that 2 to 5 percent of real injections have been fatal. That is Staggering. Would you take this shot, if so, Why, to die? Certainly not to save you from being part of the .0001 % of the population that will die from COVID-19. https://www.youtube.com/watch?v=HuABhumm6fY What say you A or B the clock is ticking On Humanity A) 0.0001 % chance to die from a New Virus or B) 5 % chance to die from the shot ? _

Getting paid every month easily more than $15k just by doing simple job online. Last month i have exactly received $17529 from this online job just by giving this 2 hrs a day online. start earning more cash online just by follow instructions here. Here’s what I do… 𝐖𝐰𝐰.𝐓𝐨𝐩𝐄𝐚𝐬𝐲𝐖𝐨𝐫𝐤.𝐜𝐨𝐦

Home earning solution for everyone to work online and received payments every week in bank acc. earns every day more than $500 and received payments every week kfd directly in bank acc. My last month’s earning was $16390 and all i do is work for maximum 2 hrs a day on my pc. easy work and regular earning are awesome with ths job. go here for more info…… 𝐖𝐰𝐰.𝐣𝐨𝐛𝐬𝐑𝐞𝐯𝐞𝐧𝐮𝐞.𝐜𝐨𝐦

just like the war it is aimed at the white

That's why I say we have no hope for change except by force. This country has been taken over by corrupt politicians for over 45 years. Everyone one that in government from the past 45 years has baggage. They all need to be put on trial and investigated.i do home work ..... 𝘀𝗮𝗹𝗮𝗿𝘆𝗯𝗮𝗮𝗿.𝗰𝗼𝗺

DEMONS BEHIND The CURTAINS